Indefinite pronouns are a small group of pronouns such as everything, nobody or something, which are used to refer to people or things in a general way, without saying exactly who, what or how many they are. Now let’s see the Spanish one: 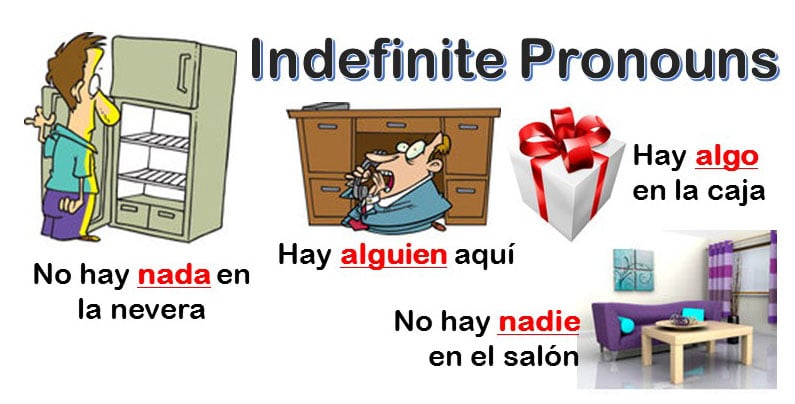 Here you have some of the most important Spanish indefinite pronouns:

1. Alguien “somebody/anybody” is used in affirmative or interrogative sentences to refer to a person. Algo “something/anything” is the equivalent pronoun used to refer to a thing.

Tengo algo para ti (I have something for you)

No tengo nada para ti (I have nothing for you)

3. Alguno/a (some, any) shortens to algún before a masculine, singular noun, and varies in gender and number according to the noun it refers to alguno, alguna, algunos, algunas:

4. Ninguno/a (none, no) shortens to ningún before a masculine, singular noun. When it follows the verb, a double negative is required:

Click on the link if you want to learn more about the Spanish indefinite pronouns in a video.

Now it is time to practice what you have learned with some interactive exercises. Remember you can contact your tutor with any question you have about Spanish indefinite pronouns. Don’t you have an online Spanish tutor yet?