Learn the GENDER of the Spanish noun is quite important, as you already probably know. This is because every single Spanish noun -not just the words for people- is either masculine or feminine. This is its gender “EL GÉNERO”, and you need to know a noun’s gender because words used with it, such as articles and adjectives, have corresponding masculine and feminine forms. Click in the link to learn more about the gender of the nouns in Spanish.

Although maybe you don’t know that some Spanish nouns change meaning according to their gender. A noun in this category can mean one thing in the masculine form but have a totally different meaning in the feminine form.

List of nouns that change their meaning according to their GENDER

It is not that complicated. You simply must memorize nouns in this category. The table  below presents some of the high-frequency Spanish words whose meanings change according to gender (notice that some have a change in the spelling, but another look exactly the same): 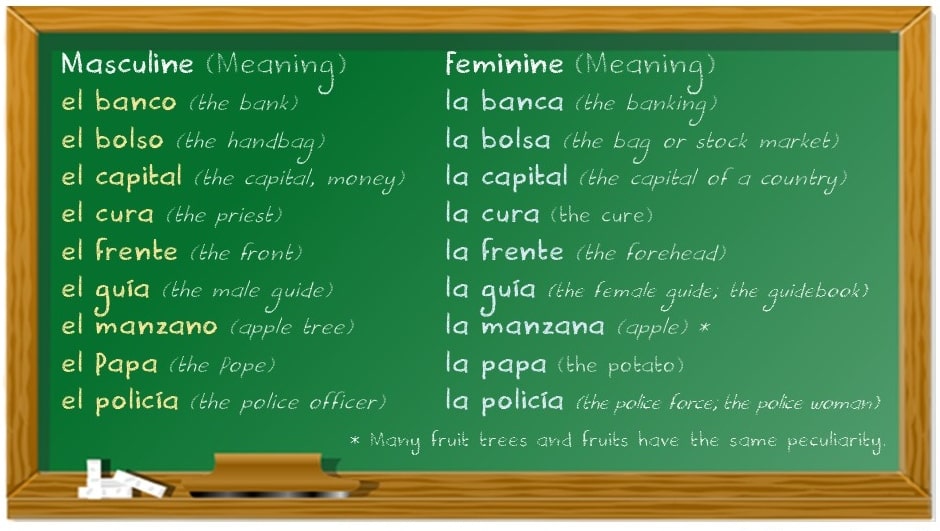 Remember you can contact your tutor with any questions you have about the gender of the nouns in Spanish. Don’t you have a Spanish online tutor yet?  On the other hand, below you can find a quiz to practice those nouns that change their meaning according to their gender.

If you want to improve your Spanish grammar knowledge, why don’t you try our Spanish tutorship? You will be able to review any Spanish topics with one of our tutors in an individual lesson via online.